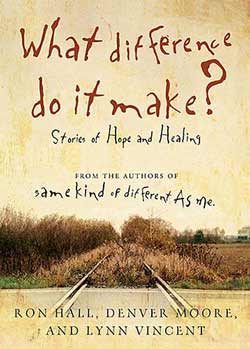 This is a continuation of the book - Same Kind of Different as Me about slavery and the homeless in the 21st century and what difference has been made in the last two years upon thousands of homeless in the USA and around the world through these two incredible people. People have started to see the homeless through the eyes of God, even if they are not people of faith.  People are venturing out of their comfort zones, slowing down, stopping to talk and visit and listen and doing some small things to help and bless those living on the streets.

A movement is starting amongst the homeless by a former indentured slave / sharecropper, an art dealer and a woman who saw the homeless through the eyes of God. People like Detra who lives in Texas started carry food, socks and blankets in her car so she could bless the homeless. A church started having a picnic once a month where church folk and the homeless could eat and talk and listen and then things have started to happen. A seven year old named Lucy started asking questions about people who live on the street and has become an advocate and fund-raiser for the homeless. Simple steps and yet city by city, people are starting to see people that they once tried to avoid. You will hear the stories of many of them.

"After we worked in the fields, the white kids would go inside their houses and get cleaned up for supper. But the colored kids would line up on the front porch, every one of us naked as a jay-bird, to take our bath in a number- ten washtub. We all used the same water 'cause the water come from a cistern that catched the rain off the roof, and we didn't have no water to throw away."

You see a grown man who could not read or write - having more wisdom than a PhD. You will get to see some of Denver's paintings as well. After you read this book -- you too will get involved with the homeless. Just like Denver says, " You got to stoop down to help a man up." But after the homeless began to bless me much more than I blessed them, after my heart started to warm to the task, I realized God didn't command us to love only for the sake of others but our own sakes as well. Page 182

Purchase What difference do it make? on Amazon