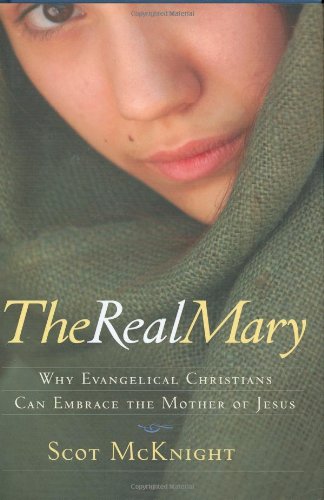 Scot McKnight gives many reasons why he should write a book about Mary but his reason that stuck with me the most is on page 6 "that she always leads us to Jesus. When we discover the real Mary, the one who lived in first-century Galilee with Joseph...who struggled at times herself, we also discover someone we can embrace because Mary embraced her son as we are called to do."

How much of what we have come to believe about Mary comes from our 21st century Americana picture of Mary rather than the first century reality and context of where she lived? I again saw the movie, "The Nativity" as I was reading, "The Real Mary," and I must say that both the movie and this book give us an idea about the struggles and challenges of Mary and Joseph within the first century that we hardly consider today. That is the real miracle of Christmas that Jesus ever made it to his birth with all of the cultural challenges that this couple faced. And then their fleeing as refugees to Egypt and hearing the echos of the screams of mothers and baby boys being killed by Herod's storm troopers in search of the boy King. Mary and Joseph's lives were filled with unbelievable challenge and struggle and yet she believed in what her Son had come to do.

I was deeply challenged by the 6th ministry themes of Jesus and the influence that Jesus would have learned from his mother regarding his mission. Page 104, " First, as Mary exclaimed,' holy is his name' so Jesus taught his followers to pray to the Father, 'hallowed (holy) be your name'. Second, as Mary gloried in the arrival of food, the relief of poverty, and the elavation of those oppressed when she proclaimed that, 'he has filled the hungry with good things,' so her son blessed the poor and fed the hungry. Third, as Mary saw God at work bringing, 'down rulers from their thrones,' so Jesus regularly had strong words with political and religious leaders about injustice and corruption. Fourth, as Mary knew the mercy of God for herself, for her relative Elizabeth, and for her people Israel, so Jesus became famous for his deeds of mercy and acts of compassion. Fifth, as Mary yearned for the redemption of Israel, like Simeon and Anna and all of the other Anawim (righteous poor), so Jesus' heart was broken over the condition of Israel, and he longed for it to return as a chicken brood to its mother. Finally, as Mary herself almost certainly became a widow, so Jesus himself regularly went out of his way to care for widows in their distress. " If Jesus is just like us, where would he have learned these things, if not from his mother?

This book gives us a clear picture of why we should honor Mary, why we should learn more about her and more importantly to us today, how does her life of challenge and struggle speak to us where we live today. I think, like to many evangelicals, I have skipped over the life of the mother of Jesus and have missed a great opportunity to learn modern day truths. With the reading of this book, I am changing that and maybe you will too...

Purchase The Real Mary on Amazon