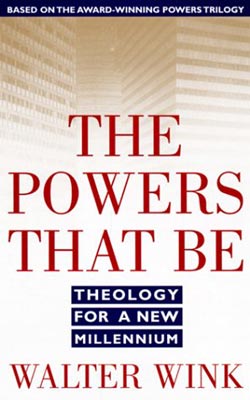 Walter Wink has been on my radar screen for many years but in reading recently from N.T Wright, Greg Boyd and Rob Bell and their references to Walter Wink, I had to get this book. In 1993, Engaging the Powers  and the Powers trilogy won several awards. The powers that be are a shortened version, particularly of Engaging the Powers and I was not disappointed. It was so rich that I had to stop on several occasions, pray, re-read and pray again. This happened throughout the reading of The Powers that Be.  I also needed to keep my dictionary close at hand.

This is a book that covers a lot of ground related to worldview, the Powers and their domination system and how history belongs to the intercessors and prayer warriors. It also tackles the hard words of Jesus and what he was meaning in the coming of the Kingdom of  God which made so much sense.  He underlines that evil is not just personal but structural and spiritual and on page 31, states that "Any attempt to transform a social system without addressing both its spirituality and its outer forms is doomed to failure. "

He looks at Jesus' words in the context of the first century and their meaning then. Somehow we can read the Bible and  translate it into our modern day context. Jesus' words were so radical for the day, we would miss the equivalent today because we would not go radical enough. In Jesus' answer to domination, he identifies domination, equity, non-violence, women, purity and holiness, family, law and sacrifice and it is worth the whole book.  You will be deeply challenged but you will understand why Jesus' words seemed so strong, even at times questionable. You will have some 'aha' moments and then serious reflection as to what does this mean for me right now,  when you read this book.

He spends quite a bit of time on the major idol today and calls it, "the myth of redemptive violence" and how we can break the spiral of violence. Jesus offers a radical third way and you will be amazed and deeply challenged to action at what he says.  How do we stand up against the powers that continue to oppress? How do we see God's kingdom coming now on earth as it is in heaven. This is not for the faint-hearted or those who are passive, this is for the courageous and he is calling this generation for action and to engage The Powers That Be.

I will close with a few of Wink's comments on prayer on page 196-197 " Prayer in the face of the Powers is a spiritual war of attrition. When we fail to pray, God's hands are effectively tied. That underlines the urgency of our praying. Prayer that ignores the Powers ends by blaming God for evils committed by the Powers. But prayer that acknowledges the Powers becomes an indispensable aspect of social action....we are emboldened to ask God for something bigger. The same faith that looks clear-eyed at the immensity of the forces arrayed against God is the faith that affirms God's miracle-working power. Trust in miracles is, in fact, the only rational stance in a world...."

Read this book and get more engaged in seeing God's kingdom coming where you live and work.

Purchase The Powers that Be on Amazon