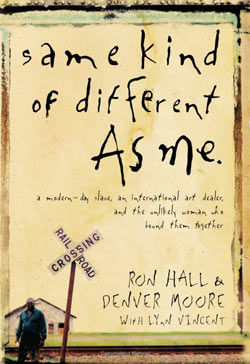 The front cover says, “ a modern day slave, an international art dealer, and the unlikely woman who bound them together. “

This is a powerful, fascinating story that covers the early 1950’s to mid 2000 in Louisiana and Texas about a black, sharecropper (who was really a virtual slave) who became a hobo, hopping on and living on trains and then how he lived for 30 years as a homeless man on the streets of Fort Worth, Texas. This book is about how the life of a homeless, dangerous man meeting up with a couple, Ron and Deborah and their story being interweaved together.

Denver speaks the language of rural Southern African American who has never gone to school, worked in the cotton fields from sunrise to sunset and never touched any money until he was an adult. For someone not from the South, the language may take a bit of getting used to...

Denver had never spoken to a white woman before until Miss Debbie. He wrote on Page 4,” Miss Debbie was so pushy, I couldn’t keep her from finding out my name was Denver. She investigated until she found it out on her own. For a long time, I tried to stay completely outta her way. But after a while, Miss Debbie got me to talkin ‘bout things I don’t like to talk about and tellin things I ain’t never told nobody — even about them three boys with the rope. Some of them’s the things I’m fixin to tell you. “

The wisdom and simplicity of those who do not have – will make you cry.....then start thinking hard and then move you to some kind of response. Don’t be afraid to read this book.

Purchase Same Kind of Different as Me at World Christian Bookstore

Purchase Same Kind of Different as Me on Amazon