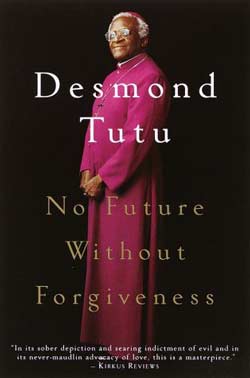 South Africa is such an incredible country, a beautiful country and beautiful peoples meant to be a blessing to all of its people, to the continent of Africa and to the world. Archbishop Desmond Tutu has written a remarkable story of the impact of apartheid upon its people.  Nelson Mandela wrote on the back cover, "The Truth and Reconciliation Commission (TRC) of South Africa has put the spotlight on all of us...In its hearings Desmond Tutu has conveyed our common pain and sorrow, our hope and confidence in the future."

This is also the story of the most incredible free elections that the world has witnessed and how South Africa avoided a much anticipated bloodshed.  With so many other countries that have looked evil in the face in their history and have had much different results than South Africa. Why is that? This book gives the reader the reasons why this process succeeded.

Archbishop Tutu was surprised as a pastor and a man of faith to be asked to chair this committee with so many lawyers, parliamentarians, judges, health care workers and people of other faiths who could have capably led this commission. He also was about to retire and looking forward to it. One can easily see on page 49-50 why lawyers and people who understand government were needed when the law was passed establishing the TRC that the following conditions were allowed for amnesty:

1. The act for which amnesty was required should have happened between 1960, the year of the Sharpeville massacre, and 1994, when President Mandela was inaugurated as the first democratically elected South African head of state.

2. The act must have been politically motivated. Perpetrators did not qualify for amnesty if they killed for personal greed, but they did qualify if they committed the act in response to an order by, or on behalf of, a political organization, such as the former apartheid state and its satellite Bantustan homelands, or a recognized liberation movement such as the ANC or PAC.

3. The applicant had to make a full disclosure of all the relevant facts relating to the offense for which amnesty was being sought.

4. The rubric of proportionality had to be observed-- that the means were proportional to the objective.

If those conditions were met, said the law, then amnesty "shall be granted."

The Commission dealt with issues of remorse, impunity and justice amongst a very diverse group of people as well as compensation and related issues. President Mandela must have seen something different in appointing a pastor and Archbishop as the Chair that this was indeed going to be a spiritual process rather than merely political. Dealing with issues such as forgiveness, reconciliation and reparation were not normal discussion and decision making in the halls of government.

Faith informed the Commissions discussions and particularly the Christian faith.  I was deeply impressed with  Desmond Tutu, how practical he is, how articulate he is and how his faith informs all that he does. An example on page 82/83- " It was a relief as the Commission to discover that we were all really children of Adam and Eve. When God accosted Adam and remonstrated with him about contravening the order God had given about not eating a certain fruit, Adam had been less than forthcoming in accepting responsibility for that disobedience. No, he shifted the blame to Eve, and when God turned to Eve, she too had taken a leaf from her husband;s book (not the leaf with which she tried to ineffectually to hide her nakedness) and tried to pass the buck. We are not sure how the serpent responded to the blame being pushed on it. So we should have thus not not have been surprised at how reluctant most people were to acknowledge their responsibility for atrocities done under apartheid. They were just being the descendants of their forebears and behaving true to form in being in the denial mode or blaming everyone and everything except themselves."

"So frequently we in the commission were quite appalled at the depth of depravity to which human beings could sink and we would, most of us, say that those who committed such dastardly deeds were monsters because the deeds were monstrous. But theology prevents us from doing this. Theology reminded me that, however diabolical the act, it did not turn the perpetrator into a demon. We had to distinguish between the deed and the perpetrator, between the sinner and the sin, to hate and condemn the sin while being filled with compassion for the sinner... theology said they still, despite the awfulness of their deeds, remained children of God with the capacity to repent, to be able to change."

This is really a book about forgiveness and reconciliation for awful things done to fellow human beings. It is a book about the scandal of love and grace given to people in the example of Jesus. It is a story of people just being able and encouraged to tell their awful stories of evil done to them, their loved ones and their neighbors.  It is a story of how within each of us is the capacity for this same kind of evil. It is also the story of people who have suffered so much, instead of lusting for revenge, they had this extraordinary willingness to forgive.  I was deeply moved by this book and I think you will be as well.

Purchase No Future without Forgiveness on Amazon