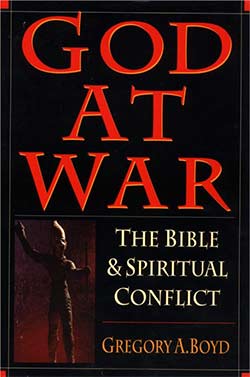 Since working in the aftermath of the Tsunami in Indonesia and Thailand and with those affected by the earthquake in Pakistan, I have been grappling again with issues such as prayer, suffering, warfare, the destructiveness of creation and the problem of evil. Greg Boyd helped me deeply with his short book, “Is God to Blame?”

I did not have to look much further to delve more deeply. God at War addresses spiritual warfare in a way that I can only say that this book is a must for missionaries, relief and development workers, health care, Christians in government and business.

We cannot forget that we are at war. Dr. Boyd’s premise of this book is on page 19, “the truth that God’s good creation has in fact been seized by hostile, evil cosmic forces that are seeking to destroy God’s beneficent plan for the cosmos. God wages war against those forces, however, and through the person of Jesus Christ has now secured the overthrow of this evil cosmic army. The church as the body of Christ has been called to be a decisive means by which this final overthrow is to be carried out.”

He covers the biblical idea of conflict, the hostile environment of the earth, the Kingdom of God as a warfare concept and how we engage the powers through the Christian life. Boyd starts out with a cross-cultural perspective on how many peoples deal with the spirit realm and ends up with how we respond to the atrocities of our world. This is a resource that you will keep referring to. I highly recommend this book but more importantly encourage us as God’s people to engage at a new level the principalities and powers that are attempting to thwart the purposes and will of God on earth.