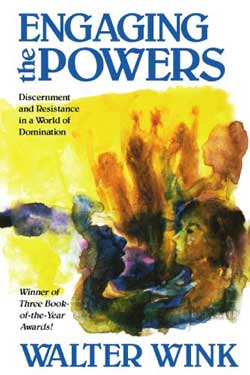 Engaging the Powers is an award winning book written in 1992 - Why have so few read this incredible book? Agree or disagree with Walter Wink but read this book and have the way you view the world shaken up, seriously. He is a brilliant yet humble writer. I cannot believe that I did not read this book when it came out. I had to have referrals by Chuck Colson, Rob Bell, Greg Boyd, N.T. Wright and others. He has influenced a whole lot of other leaders in the Body of Christ. Do yourself a favor and read this book. It is not an easy read but whether you are a follower of Jesus or not, you will better recognize why his words, his life, his model have turned the world upside down. This book will challenge the way you think, the way that you view Jesus and his radical yet simple way and it will help you to better understand the context of the 1st Century in which Jesus wrote and why he was killed by the religious establishment. Wink provides greater clarity to why our that world and our world today is so messed up by systemic injustice, by delusional assumptions, the domination system that has lasted for 5,000 years and the principalities and powers that rule, exploit that system and seriously oppress and destroy people. Wink sets out to "unmask" that system and show it for what it really is and then show what we can do about it. He also shows what transformation will look like when it honors both the personal and the social. His look at Jesus in the context of the culture of the day and domination, equality, purity and holiness, racism and ethnocentrism, family, law, sacrifice, non-violence, women and children, healing and exorcism is worth the entire book. I have read very few authors that have written so deeply. You need to plan in times of meditation, reflection and prayer as this is one of those kinds of books. The implications of this book will cover every area of your life. Let me give you an example on page 136. "He (Jesus) was not a reformer, bringing alternative, better readings of the Law. Nor was he a revolutionary, attempting to replace one oppressive power with another. He went beyond revolution. His assault was against the basic presuppositions and structures of oppression itself. Violent revolution fails because it is not revolutionary enough. It changes the rulers but not the rules, the ends but not the means. Mot of the old androcratic values and assumptions remain intact. The world, and even the church, had no categories for such fundamental change. It is no wonder that the radicality of Jesus was soon dampered by the church.......If Jesus had never lived, we would not have been able to invent him. There is, in the integrity of his teaching and living, an expose and repudiation of the Domination System that no one trapped in that system could possibly have achieved." Wink also spends quite a bit of time looking at violence, the myth of redemptive violence and some key messages of Jesus - non-violence and loving our enemies and becoming what we hate. Page 195, "The very act of hating something draws it to us. Since our hate is usually a direct response to an evil done to us, our hate almost invariably causes us to respond in the terms already laid down by the enemy. Unaware of what is happening, we turn into the very thing we oppose. This is so far from a message about passivity. This is about dying, revolt and resistance to all that is dehumanizing, devaluing and demoralizing. You will see Jesus in another way through Engaging the Powers and maybe we will continue the work that Jesus started and continue living his way. Wink ends this book with revisioning history, monitoring our own inner violence and the critical importance of prayer and the powers. Engaging Powers will teach you about a different kind of prayer. Wink says "that history belongs to the intercessors, who believe the future into being" and that "intercession is spiritual defiance of what is, in the name of what God has promised." This chapter will encourage you to prayer and to " haggle with God for the sake of the sick, the obsessed, the weak and to conform our lives to our intercessions. " Read this book. Re-read this book. Maybe we can play a small part in seeing God's dream being fulfilled in our world today.

Purchase Engaging the Powers on Amazon